The Fibonacci sequence is the series of numbers where each number is the sum of the two preceding numbers. For example,

Mathematically we can describe this as:

Many sources claim this sequence was first discovered or "invented" by Leonardo Fibonacci. The Italian mathematician, who was born around A.D. 1170, was initially known as Leonardo of Pisa. In the 19th century, historians came up with the nickname Fibonacci (roughly meaning "son of the Bonacci clan") to distinguish the mathematician from another famous Leonardo of Pisa.

There are others who say he did not. Keith Devlin, the author of Finding Fibonacci: The Quest to Rediscover the Forgotten Mathematical Genius Who Changed the World, says there are ancient Sanskrit texts that use the Hindu-Arabic numeral system - predating Leonardo of Pisa by centuries.

But, in 1202 Leonardo of Pisa published a mathematical text, Liber Abaci. It was a “cookbook” written for tradespeople on how to do calculations. The text laid out the Hindu-Arabic arithmetic useful for tracking profits, losses, remaining loan balances, etc, introducing the Fibonacci sequence to the Western world.

Examples of the Fibonacci sequence:

In the book, Leonardo pondered the question: Given ideal conditions, how many pairs of rabbits could be produced from a single pair of rabbits in one year? The answer, it turns out, is 144 ¬— and the relationship used to obtain that answer is, you guessed it, the Fibonacci sequence. This thought experiment artificially dictates that the female rabbits always give birth to pairs consisting of one male and one female.

¬At the start, two newborn rabbits are placed in a fenced-in yard and left to breed. After the first month only the original pair remains since rabbits can't reproduce until they a¬re at least one month old. By the end of the second month, the first pair give birth, now leaving two pairs of rabbits. In month three the original pair of rabbits produce another pair of newborns while their earlier offspring grow to adulthood. This leaves three pairs of rabbits, two of which will give birth to two more pairs the following month.

The total number of rabbits follows the Fibonnaci sequence. After 12 months there will be 144 pairs of rabbits. After two years, the number would jump to 46,368 pairs! 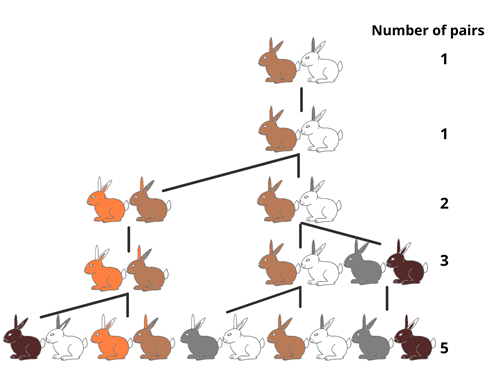 There is a special relationship between the Fibonacci numbers and the Golden Ratio, a ration that describes when a line is divided into two parts and the longer part (a) divided by the smaller part (b) is equal to the sum of (a) + (b) divided by (a), which both equal 1.618. This is represented by the Greek letter (φ). The ratio of any two successive Fibonacci Numbers approximates the Golden Ratio value ( φ = 1.6180339887…). The bigger the pair of Fibonacci numbers, the closer the approximation. From there, mathematicians can calculate what's called the golden spiral, or a logarithmic spiral whose growth factor equals the golden ratio. 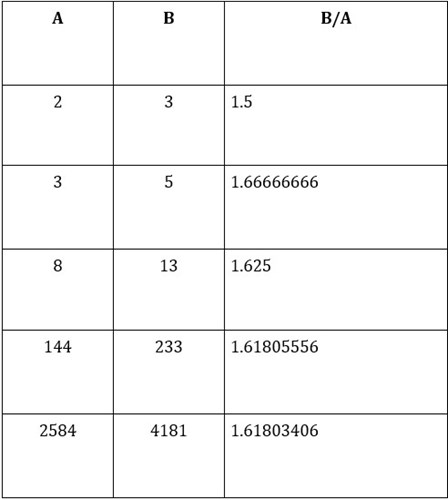 Using the values of the sequence as the edge length of squares arranged as below, a spiral is generated.

There are many examples of Fibonacci numbers (numbers that appear in the sequence) appearing in the natural world. However, just because a series of numbers can be applied to an object, that doesn't imply there's a correlation between the math and reality.

Fibonacci numbers do appear in nature often enough to prove they reflect some naturally occurring patterns. You can commonly spot these by studying the manner in which various plants grow. 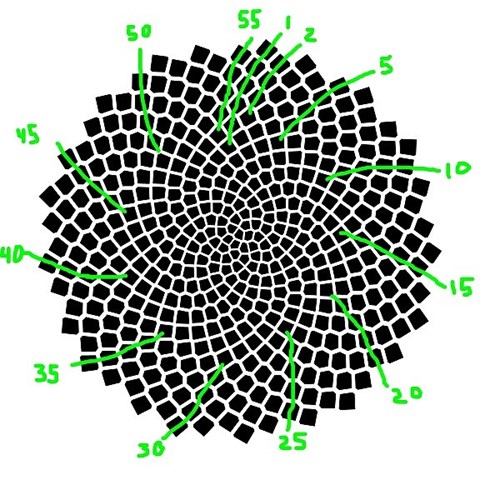 The Fibonacci Quarterly is a scientific journal on mathematical topics related to the Fibonacci numbers, published four times per year. It is the primary publication of The Fibonacci Association, which has published it since 1963.

Misconceptions about the Golden Ratio (https://www.jstor.org/stable/2686193?origin=JSTOR-pdf)

The Myth That Will Not Go Away (https://www.maa.org/external_archive/devlin/devlin_05_07.html)

What Is the Fibonacci Sequence? | Live Science (https://www.livescience.com/37470-fibonacci-sequence.html)