Film Canister Rockets are a favorite experiment at Imagination Station.

One of the best things about this activity is that you can do it at home and you can design some pretty sophisticated experiments around it. We start with the materials and how to make them fly, then we go on to explore the science behind Film Canister Rockets and finally we link it to how real rockets work.

Here's what you need: 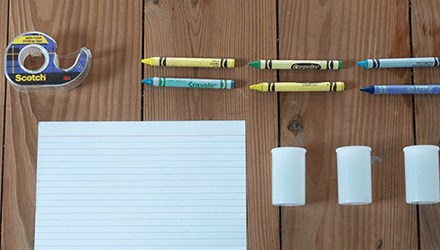 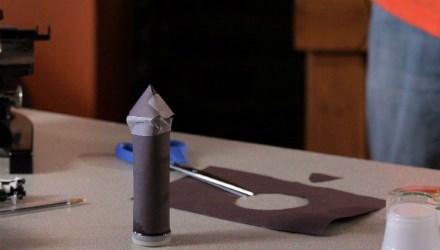 As the antacid tablet fizzes, carbon dioxide is released inside the canister. Pressure from the gas builds and eventually pops the lid off. The thrust, or push, of your rocket is related to how much pressure built up inside the canister before the top popped off.

What would happen if…

Remember that when you are conducting experiments you only want to change one thing at a time. Keep everything else the same in order to see how the thing you changed (or the variable) affects the outcome. In this case your rocket going up into the air.

If you try some of these experiments or others with the Film Canister Rocket activity please let us know! Post a comment to our Facebook page about which variable (water temperature, fuel or design) you changed and how it affected your rocket!

What is happening inside that film canister?

First of all, we all know that the most common effervescing tablet used in a film canister rocket is Alka-Seltzer. In fact, the company that makes Alka-Seltzer is so proud of the fact that it can be used in science experiments they have a whole page on their website dedicated to it! Not to rain on the Alka-Seltzer science parade but, just between us, the generic brands also work perfectly well for this activity and it saves some moolah!

When you mix these effervescing tablets with water, a chemical reaction takes place between the citric acid and sodium bicarbonate contained in the tablet and the water. This chemical reaction creates many, many bubbles of carbon dioxide gas. Citric acid is a weak acid and is in the juice of most citrus fruits like lemons or limes. Sodium bicarbonate is, well, basically baking soda. (Has this reminded anyone of another great science experiment that uses a weak acid and baking soda? That’s right, baking soda and vinegar [acetic acid] produce the same reaction when mixed together. Lot of bubbles of carbon dioxide gas!)

You already know what happens when you combine this chemical reaction with a film canister, when it pops, it goes up!

Why does your rocket go up?

It goes up because gas is building and building in the closed film canister and since the lid is the weakest point of the canister, the lid pops off and all that gas comes rushing out of the end of the canister. This action can be explained using Newton’s Laws of Motion, more specifically it is an example of Newton’s Third Law of Motion – “Every action has an equal and opposite reaction”. The gas rushing out of one end of the canister (the action) causes your rocket to move in the opposite direction (the reaction). This is exactly how all rockets work whether you use an effervescing tablet as your fuel or a chemical rocket propellant like they do at NASA.

How do the NASA rockets work?

Quite simply, rockets are how NASA can get all those amazing missions off the ground. These rockets use a pressurized fuel and an oxidizer. The oxidizer is something that allows the fuel to burn without using outside air. (Can you think of a reason why this might be important? Write your answer in the comment box below!) The fuel, in a gaseous state, is pressurized because this forces it out the end of the rocket just like our Film Canister Rocket! However, there are a few more parts to an actual rocket.

The fuel used in the rockets like the ones that help the space shuttles enter space use liquid hydrogen as the fuel and liquid oxygen as the oxidizer. You may be saying to yourself, “I thought they just said that the fuel is in the gaseous state not liquid?”. You are right, the fuel and oxidizer are only in these liquid states when they are in the holding tanks and they can only stay in this liquid state at extremely low temperatures. The fuel and oxidizer are allowed to combine within the combustion chamber and as the burn they turn into a gas (gases take up about 1,000 times more space than a liquid) this causes the intense pressure. It is exactly like our Film Canister Rocket, the carbon dioxide builds up and puts intense pressure on the canister so the lid pops off. In the case of our shuttle rocket the fuel and oxidizer burn, are put under intense pressure and are released not by the popping off of a lid but through a tiny hole on the bottom of the combustion chamber called a nozzle. If you want to watch a mind bending video that is connected to the Film Canister Rocket activity watch Alka-Seltzer added to Spherical Water Drop in Microgravity.

We hope we were able to answer your questions about rockets but if not stop into Imagination Station and we would be happy to talk more about them!