Are you registered to VOTE?

Check your status, find your polling location and more!

How to make a Naked Egg

A “naked egg” is an egg that has no shell. Let me say that again, an egg with no shell. This is not something you normally run across and even when I show a naked egg to someone they often just don’t get the idea that the shell is gone – yet the egg stays intact. You might want to check out the anatomy of an egg to get an idea what we are dealing with.

The egg insides remain intact and are held together by the two fragile membranes just inside the shell.

Here’s what you need

Let’s get to the fun stuff. In order to make a Naked Egg you will need the following items:

The process is really very simple. Carefully place the egg in a cup and fill the cup with vinegar so that the egg is completely covered. Don’t worry if the egg floats a bit. Just get enough vinegar in the cup to mostly cover the egg.

Now the hard part – you will have to wait as the acetic acid in the vinegar begins to react with the calcium in the egg shell. In just a short while, you should see some bubbles appearing on the outside of the egg. These are bubbles of carbon dioxide gas from the reaction. It can take 12-24 hours before a good portion of the shell is removed. A good sign of progress is a white frothy scummy layer on the top of the surface of the vinegar.

After a day of soaking you can carefully remove the egg from the vinegar. I would suggest pouring the liquid into another cup and catching the egg in your hand. Using a spoon to fish the egg out might seem like a good idea, but I’ve seen a few eggs break or get damaged when using a spoon to remove them.

At this point you may be able to literally rub the shell off the egg with your fingers. It will rub off as a white powdery substance. Give it try, just be very careful, you don’t want to break the egg, it’s getting more fragile as the shell is slowly dissolved. Depending on your particular egg, you may already have a naked egg. However, I would suggest you fill a cup with fresh vinegar and soak the egg for at least one more day.

After two days of soaking you should have a pretty cool Naked Egg. Notice that the egg is a bit bigger than when you first started. This is because some of the vinegar (and some of the  water in the vinegar) has moved through the membranes to the inside of the egg. The membranes are semi-permeable and allow water to move through them. This is called osmosis.

Fun things to do with your naked eggs

Naked eggs are cool, but experimenting with them is even cooler. You have probably already noticed that your naked egg is kind of rubbery. How far above the table can you drop your egg and have it survive by bouncing? I would suggest you start at one inch, then try two inches, and so on. Keep in mind that eventually this is going to get messy when it the membrane breaks. You might want to do this experiment outside.

If you want to see your egg get really big, simply put it in a cup filled with water. The makeup of the inside of the egg is around 90% water. If you put the egg in a cup of (100%) water, the water will begin to move inside the egg through the membrane to equalize the amount of water inside and outside of the egg membrane. This process of water moving through a membrane is called osmosis. Osmosis equalizes – or makes the concentration of water on both sides of the egg membrane the same. This means the egg will swell as the water moves inside and get larger.

You can even color the inside of your egg if you soak it in some water with food coloring. This is a nice way to verify that the water in the cup is really moving through the egg membrane and not just coloring the outside.

Now that you know about osmosis, you might ask “can I make my egg shrink” or shrivel up? Of course, you just need a liquid that has only a little bit of water. A common substance you may have at home that fits this requirement is corn syrup.

Slip your Naked Egg into a cup filled with corn syrup and let it sit for a day, or two, or more and you will begin to see your egg begin to shrink and look sort of  baggy. Corn syrup has very little water content. Once inside the syrup, the water inside the egg begins to move across the semi-permeable egg membrane to equalize the water concentration. Again, that’s osmosis at work. If you leave your egg in the syrup long enough it will begin to look something like a huge raisin – with of course a yoke inside.

If you get tired of the shriveled egg look, you can reverse the process by just dunking the egg back in a cup of water. The water will once again move across the membrane and fill the egg with water again.

A big thank you to one of our visitors who grabbed a great photo of what happens when you soak a naked egg in corn syrup for a few days. I might call it a “dehydrated naked egg.” And side-by-side is a brilliant red naked egg soaked in red food coloring. Thank you Evers Ding for permission to use your photo and check out the rest of Evers egg photos on his blog.

Can I eat the Naked Egg? 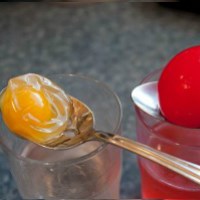 Several visitors have posed the question, “Can I eat my naked egg?” I would NOT recommend eating a naked egg prepared this way. Keep in mind you created your egg by soaking a raw egg in vinegar sitting at room temperature for a few days. That is not how to treat eggs you are going to eat! Even if you stored the egg in the refrigerator, I still would not recommend eating the raw egg. Some have asked if you could store the egg in the fridge, then cook it and eat it. Well, I suppose you could, but given the amount of vinegar that probably moved past the membrane into the egg, it’s most likely not going to taste all that great. Instead of eating your naked egg, just experiment with it.

Look, if you are really interested in creating a Pickled Egg that you can eat, check out some of the recipes from the National Center for Home Food Preservation and for more information about safe egg handling practices check out the Egg Safety Center.

A few of you asked if the eggs will start to have that rotten egg odor after a while. Well, I think it depends on how you store the egg. That rotten egg odor comes from hydrogen sulfide. Eggs contains sulfur because it is needed for the production of feathers in the chicken.

I have not noticed any bad odors with my naked eggs. After dissolving the shell in the vinegar, I keep the egg in a glass of water for up to a week and have not noticed any odor when the egg does accidentally break. It would be an interesting (and probably stinky) experiment to leave an egg out for a week or two in order to give it a chance to start to decompose. I would suspect that as the contents start to decompose, sulfide compounds will begin to form and it will start to smell really bad.

In terms of doing a science fair project here are a couple variables you might want to explore in more detail. Just a list of ideas to get you thinking. If you come up with other ideas let me know!

I’ve received many requests from students doing science fair projects related to the Naked Egg looking for further or deeper references. I have included some print references below. You can use the World Library Catalog to locate one of these items in a library near you!