The age of the universe is estimated to be 13.7 billion years. The United States national debt is currently just over 19 trillion dollars. We hear these HUGE numbers thrown out in daily conversations (yes, I have daily conversations about the age of the universe and so should you…) but does anyone really have a grip on what a BILLION or a TRILLION of anything really looks like?

OK, so what does a trillion look like? The problem with most answers to questions like this is that they try to it into perspective by relating it to things normal people have no perspective for. For instance, did you know that,

I don’t know when the last time you traveled from the earth to the sun, much less traveled at the speed of sound in a jet, but for me those comparisons are just as mind-boggling as the concept of a trillion of something.

The Megapenny project uses something a lot more common to most of us, a penny. Most people have a few in their pockets or in a jar on the bookshelf and it provides a much better sense of scale. Round up 16 of them, stack them on top of each other into a little pile and it’s one inch tall. Place them side by side in a line and they stretch out one foot.

So much for what’s in your pockets, now break open your piggy banks and gather up one million pennies, that’s only $10,000 of course. One million pennies creates a wall four feet wide, five feet tall and one foot thick. This wall weighs nearly 6,300 pounds, or just over three tons!

Stepping up to a billion, things start to change as we start imagining stacks of pennies the size of a typical school bus. Five school buses to be exact.

As an interesting side-note, most European countries use a slightly different naming convention for large numbers and refer to our trillion, as a “thousand billion” they reserve the word trillion for a million billion or 1,000,000,000,000,000,000.

Add another three zeros and we begin to enter into the realm of the age of the universe (in years) and the national debt (in dollars – not pennies). One trillion pennies would create a mind boggling cube with edges nearly as long as a football field. If only there were that many pennies in existence! 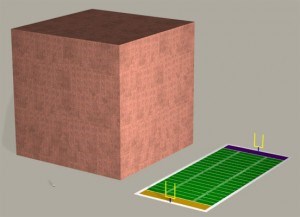 Current estimates by the U.S. Mint place the number of pennies in circulation at around 140 billion. Others have estimated as many as 200 billion currently circulating. Since the first penny was minted in 1787, until present-day, over 300 billion pennies have been minted in the United States.

Of course the final step here is to image fourteen (14) of these cubes of pennies. Each penny representing one dollar of the national debt. The physical representation of large numbers is an interesting way to wrap your head around what it means to say something is in the billions or trillions, and beyond.

Of course, if pennies stacked up are just not doing it for you, head over to Global Researcher where they use 100 dollar bills in tidy little stacks to make the same point.

I found it interesting how small a package one million dollars turns out to be when made of bundles of $100 bills. It could fit in plastic grocery bag with ease!