The Science Behind the Polar Vortex

The Science Behind the Polar Vortex

As winter begins, tis the season to hear more made-up weather catchphrases that spread across social media like a raging wildfire. We have all heard them, “snowpocalypse”, “snowmaggedon”, or the latest Weather Channel winter storm name. There is one winter catchphrase you have heard about, it is a real Meteorology term, and there is a good chance that you fear it. We are talking about the dreaded “Polar Vortex”.

Before the year 2014, few outside of the Meteorology world had ever heard about this phrase even though it has been around since 1853. Then the worst arctic outbreak in 2 decades blasted its way across the Great Lakes. In northwest Ohio, we had 1-2 feet of snow on the ground followed by a wind chill of -45 degrees. All of a sudden, every national news program or article seemed to talk about this swirling vortex of cold centered over the Great Lakes. Most explained the process wrong or only partially correct, and now the memory of that nasty historic blast of cold and the seemingly new term “Polar Vortex” are branded together in our brains. So just the mention of the “Polar Vortex” brings a negative reaction when it is mentioned in a weather report. But, the polar vortex is always around in the winter regardless of our weather pattern. In fact, a “strong” polar vortex normally brings us mild weather like we have experienced at times earlier this month. It is the “weak” polar vortex-like we had in January of 2014 that is cause for concern.

What is the polar vortex?
It is a large area of low pressure and cold that surrounds both of the earth’s poles. The word “vortex” refers to the counterclockwise flow around that low pressure near the North Pole. This area of low pressure is not located at the surface, it is tens of thousands of feet up into the atmosphere.

What is the science behind the Polar Vortex?
It probably isn’t a surprise that cold air collects near the North Pole in the winter as darkness extends for months. Think of this region as a factory of extreme cold. If it stays put, then most of the civilized world never gets that nasty arctic cold, but if that air is being pushed out of the North Pole, then Old Man Winter is going to blast somewhere uninvited. 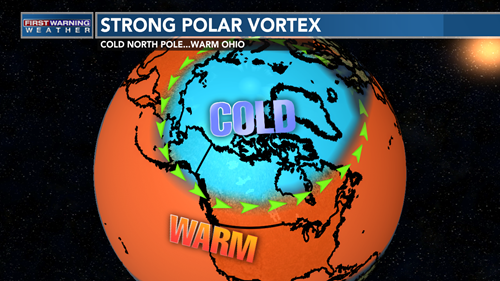 If the polar vortex becomes particularly strong, it is also classified as stable. In that scenario, the polar jet stream is also strong with few wrinkles or waves in it across the northern hemisphere. As a result, temperatures in the arctic regions become extremely cold, but they stay put. Alaska can have temperatures drop to -60 degrees F. However south of that polar jet stream, temperatures are mild across most of the US and Europe. Earlier this month with a strong polar vortex, Toledo easily got into the 50s.

However, if the polar vortex becomes weaker, things become much more interesting across the northern hemisphere. It allows for a more amplified pattern to develop in that jet stream. A weaker polar vortex can shift away from the poles somewhat or even split into 2 or 3 different weaker polar vortices as they drift away from the North Pole. That is exactly what happened in our January 2014 example. The arctic and Alaska warmed up well above normal, while northwest Ohio had one of the worst winters in recorded history. However, that happened because of a “weak” or unstable polar vortex…not a strong one. Also, the polar vortex never centered itself over the Great Lakes. It was closer to the Hudson Bay, but that was the perfect position to keep that polar jet stream well to the south and to keep the Great Lakes shivering.